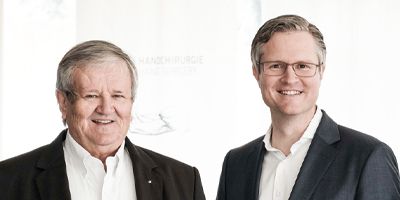 With effect of May 1st, 2020, the Mühlheim-based medical technology company Karl Leibinger has taken over the major business operations of Stuckenbrock Medizintechnik and its shares in the company Gebrüder Martin. All Stuckenbrock employees, the relevant production equipment and the products distributed by Gebrüder Martin will be taken over. The location in Lessingstraße in Tuttlingen will also be retained. Business operations will be conducted under the new company name KLS Martin Medical GmbH & Co. KG.

The Karl Leibinger Group was founded in 1896 by Ludwig Leibinger in Mühlheim as a factory for surgical instruments and is now managed by Karl and Christian Leibinger in the fourth and fifth generation. The group of companies has been owned by the Leibinger family since its foundation, employs over 1,500 people worldwide and generated a turnover of 300 million euros in 2019.

At the locations in Mühlheim, Freiburg, Jacksonville (USA) and Penang (Malaysia), implant systems for cranio-maxillofacial surgery, neurosurgery, hand and foot surgery, surgical instruments, operating lights, sterilization containers as well as electrosurgical devices and medical lasers are produced. In North and Central America, the products are distributed by a subsidiary, in the rest of the world by Gebrüder Martin.

Gebrüder Martin was founded in 1923 by the companies Karl Leibinger and Karl Vögele, which merged with Stuckenbrock, as well as five other Tuttlingen-based manufacturers of surgical instruments as a joint international sales company.

After the pro rata acquisition of the shares of the Berchtold company and the purchase of the companies Ueth & Haug Medizintechnik, Trumpf Medizin Systeme (Umkirch) and Buck Medizin- und Labortechnik, the Karl Leibinger Group had already been the majority shareholder of Gebrüder Martin with 82% of the shares since 2004. With the acquisition of Stuckenbrock Medizintechnik's shares in Gebrüder Martin, all companies of the KLS Martin Group are now fully owned by the Leibinger family.

In 1998, Stuckenbrock Medizintechnik GmbH was merged with Karl Vögele Medizintechnik, which was founded in 1884, and subsequently increased its shares in Gebrüder Martin by purchasing the companies H und H Handte as well as the shares of Josef Heiss. The company currently employs around 50 people. The company's product portfolio includes implants for hand and foot surgery, traumatology, surgical instruments, dental instruments, accessories for electrosurgery as well as scalpels and scalpel blades.

"Following the successful takeover of Jakoubek Medizintechnik and the change of name to JakuTec Medizintechnik, we will focus on expanding our CM and OEM activities in the fields of implants and instruments for spinal surgery, orthopaedics and traumatology," explains Fabian Stuckenbrock, CEO of Stuckenbrock Medizintechnik.

Christian Leibinger, President and CEO of the KLS Martin Group, is convinced that the takeover will result in synergy effects and growth potential in several product areas. "We are convinced that the new constellation will help the KLS Martin Group to further grow together and we look forward to tackling the upcoming steps together with our employees," says Christian Leibinger.

The Leibinger family wishes the Stuckenbrock family all the best and much success for their future entrepreneurial activities and would like to thank them for their good cooperation over the past 97 years. "During this time, we have experienced various ups and downs together, both as a company and as families," summarizes Karl Leibinger, President and CEO of the KLS Martin Group.