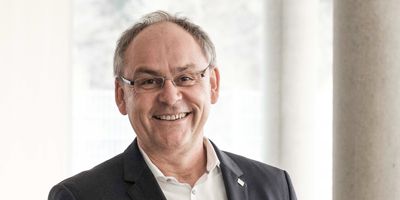 My career at KLS Martin started in 1993 when I was looking for a graduate position. Unfortunately, I had just finished my studies in precision engineering in Furtwangen in Germany during an economic crisis and the job market for graduates looked very bad.

At that time, my family still had a handicraft business for concrete and natural stone in Tuttlingen and my parents had actually wanted me to take it over. But I had other plans and therefore wanted to prove all the more that my way was the right one. As there were only a few diploma theses advertised at the companies at that time, I decided to go to the MEDICA, a huge trade fair in Germany, to talk directly to some companies. There I got into conversation with the company Fritz Hüttinger Medizintechnik from Freiburg, which then offered me a job. At that time, the company had been a shareholder of Gebrüder Martin for two years.

Despite the crisis, I was able to convince the company of my merits and, after completing my diploma thesis, I was hired as a Development Engineer in the area of devices for minimally invasive surgery. I then became a Team Leader, Head of Development, Technical Manager and, as of 2001, Managing Director of the company, which had since been renamed Trumpf Medizin Systeme. But that was not the end of my journey.

When I reflect on how I managed to get into these positions, one of my principles has prevailed for me: "Wer macht, hat Macht.“ Which can be translated to the one who is realizing things has power. I was able to learn this on my very first day of work as a graduate student. As I have already indicated, the majority of Fritz Hüttinger Medizintechnik was taken over by TRUMPF at the time I started, and the company thus became part of TRUMPF. This was also accompanied by a change in management, which meant that the Head of Development who had hired me was no longer with the company. When I arrived at the office on my first day, no one knew I was coming. There was no workstation prepared and I was on my own at the beginning. I then organized myself, proactively approached others, and gained visibility through good ideas, commitment, good performance, and heart. I'm also always open to new things and enjoy pushing things forward and taking on responsibility, which certainly hasn't been a bad thing for my career. However, in addition to business, it's also important to strike a balance in my private life and thus get a different perspective on things. For example, I love flying and hope one day to travel the world in my Beechcraft Bonanza. The variety of a hobby gives you some distance from the daily work routine and then creates space for new ideas again.

But the love for the job is also clearly a decisive factor for success. In my current position, I find it particularly exciting to see how the many group companies grow together and develop. In the past, I actually always wanted to become the Managing Director of my own company. But thanks to the many freedoms and the exciting environment that the KLS Martin Group offers me, I've changed my mind and am totally happy with my position. After almost 30 years, it also feels a bit like my own company. I think that's just great! In the meantime, by the way, my father is also behind my earlier decision not to take over the family business and we have a very close relationship.

Apart from the tasks of a Managing Director, however, I'm aiming for a much more important position in the future:  Supervisory Board - but not in companies, but then with my later hopefully numerous grandchildren.