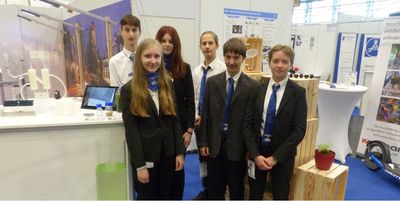 Nine young inventors of the Student Research Centre (SRC) Südwürttemberg received gold and silver medals for their research projects at the international trade fair "Ideas - Inventions - Novelties". For the fourth time in a row, we made it possible to participate by donating 10,000 euros to the SRC.

When the iENA, one of the largest inventor fairs in the world, opens its doors in Nuremberg in autumn, the Student Research Centre (SRC) Südwürttemberg will be there. For some years now, creative schoolchildren have been exhibiting technical developments at their own stand, which they had previously worked out at one of the eight SRC locations in South Württemberg. Many student ideas have received awards from the trade fair management in recent years, some have made the leap to the international trade fair level through the iENA and have received further awards there.

As in previous years, the SRC stand at the Inventors' Fair was made possible by the SRC partner company KLS Martin Group from Tuttlingen. Managing partner Christian Leibinger congratulated: "It's great to see what can happen here every year and with what inventive talent and passion the young students work. We are happy to support this passion. After all, promoting young talent is very important to us. It quickly became clear to us as a company that we wanted to support young inventors and their work."

Gold was awarded to a project from the SRC location in Tuttlingen that could not be more topical: Jan Reckermann (Immanuel Kant-Gymnasium Tut) and Sofia Mik (Gymnasium Spaichingen) have developed an intelligent battery management system for sustainable e-mobility. The product addresses one of the biggest problems of high-quality battery systems and prevents performance and service life from depending on the weakest component in the battery pack. Innovative electronics and software regulate charge and discharge management so that up to 30% more charge cycles are possible with full performance compared to current batteries.

Another project of the SRC location Tuttlingen was awarded with a silver medal: With a yield of up to 90%, Lorena Koch and Aileen Girschick (both from the Gymnasium Spaichingen) have developed a method with which octane can be obtained from a metabolic product of certain algae species as a basic building block for further processes. Hydrogen can be separated as a by-product. Thus, basic building blocks for organic chemical products or fuels as biofuels can be sustainably obtained using regenerative energies

The project "Smart street lamp" was also exhibited at the SRC stand at the Inventors' Fair. The street lighting can be controlled by pedestrians by logging in via an app. In basic mode, the luminaires are set to save energy. If required, the user can adjust the brightness to suit his requirements on his section or change the light colour depending on the weather. Sensors in the lamps detect the user's location and direction of movement. Noah Lindner and Georgi Parkov from SFZ Friedrichshafen/ BZP Kressbronn were also awarded silver.

Winfried Sturm, Executive Committee Member of IFIA (World Inventors Association) and Ambassador of Education in Science and Inventions now wants to take both Tuttlingen projects, as well as a project from the SRC location Friedrichshafen, to further worldwide inventor fairs at the booth of the Federal Republic of Germany and present them there. The reason for this is the very high quality and innovative ability of the inventions of the SRC teams.

Two other SRC projects also received gold awards: Jakob Rehberger and Jonas Münz from the SRC location in Ulm presented a method developed by the two of them, which uses ultrasound to deburr bone implants, via the Association of German Engineers (VDI). This year, the students had already won the national Youth research competition.

David Kern from SRC Eningen also received gold for his swarm sensor technology, which could be installed in forest areas and contribute to the early detection and control of forest fires.